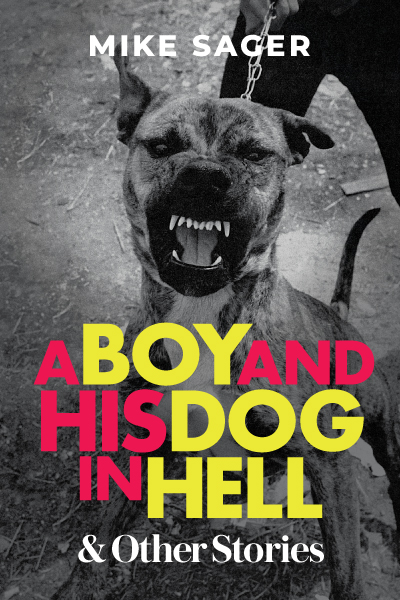 A Boy and His Dog in Hell

“For more than forty years, Mike Sager has made a career finding the quotidian within the extreme, the tender amid the grotesque.”  —Sam Freedman, award-winning author and popular Columbia Journalism School professor Sam Freedman.

A Boy and His Dog in Hell collects 19 stories that Sager—a best-selling author and veteran of the Washington Post, Rolling Stone, and Esquire—calls “my milestones, pieces that have defined and distinguished my work over forty-some years of journalism—adventures, high jinks, near-death moments, and wrenching intimate encounters that have helped to shape me as a writer and as a man.”

With Sager at the lead, the reader is taken on a journey through an America few people ever see, safe as they are within the borders of their own colorful squares in the nation’s patchwork quilt of diverse cultures, communities, and circumstances.

We meet: A pair of middle-school-age dropouts, brothers,  living in the ruins of Northern Philadelphia, working shifts on the corner selling cocaine and spending their time off fighting stolen pit bulldogs to the death. The members of a once-proud street gang who’ve lost their fortunes in a cloud of crack smoke. A seven-foot-six-inch, Sudanese-born basketball player—the first time he attempted a dunk, he broke his front teeth on the rim. He went on to become one of the greatest shot-blockers in the history of the National Basketball Association.

We spend time with blue collar tweakers in Hawaii; Aryan Nation troopers in Idaho; and near-fatally hip heroin addicts on the Lower East Side of Manhattan. We meet the Reverend Al Sharpton at a time, early in his career, when this important civil rights figure was vilified and feared by many people of all races. A road trip across the country brings Sager eyeball to eyeball with a number of America’s smartest men (and one woman).  Life, it turns out, can be just as challenging on either end of the bell curve.

We attend the “Superbowl of Rodeo” with the world’s winningest professional cowboy, a deep dive into red-state values and the American Western Ideal. We meet Charlie Van Dyke, 650 pounds, a fat man in a no-fat world, and Bill Hicks, a comedic genius destined for mainstream stardom until tragedy struck. And we spend seven days with NBA lightning rod Kobe Bryant, who lifted the craft of basketball into compelling art . . . and so beautifully made the tricky transition to next chapter . . . before leaving the earth suddenly and way too soon.

Also included: six feature stories written during Sager’s early years at the Washington Post, where he began his career as a copy boy in 1978. He has completed paid assignments in each of the past six decades.

“I once described Mike Sager as “the Beat poet of American journalism.” The title is still apt. For decades, he has explored the beautiful and horrifying underbelly of American society with poignantly explicit portrayals of porn stars, swingers, druggies, movie stars, rockers and rappers, as well as stunning stories about obscure people whose lives were resonant with deep meaning—a 92-year-old man, an extraordinarily beautiful woman, a 650-pound man. He became a journalistic ethnographer of American life and his generation’s heir to the work of Gay Talese, Tom Wolfe and Hunter S. Thompson. His imposing body of work today is collected in more than a dozen books and eBooks, including the best sellers Scary Monsters and Super Freaks and Revenge of the Donut Boys”  —Walt Harrington, author, journalist, and past head of Journalism at the University of Illinois.

“Because Sager doesn’t put any barriers between us and his characters, and because he renders them so thoughtfully and with such compassion, readers are allowed to focus on the drama of the stories. Above all, Sager doesn’t get in the way of the story. He is not a commentator or a pundit. He doesn’t analyze, his pieces don’t have an obvious aim or thesis. His prose is so direct and unfussy, it’s almost invisible, like a camera. And yet there is a propulsion to it because in almost every sentence you’ll find a fact—that blessed newspaper training. The sentences flow with a definite rhythm, but Sager’s style is unadorned with falsity, unburdened by over-interpretation. He’s a natural storyteller. You never get the feeling he’s there just to show off, only to entertain you.” —Alex Belth, editor of EsquireClassic.com and The Stacks Reader Series

“This collection of pieces by Mike Sager is just brilliant— brave, written with soul and beauty, and unflinching in the depiction of a real America that needs to be revealed. Bravo to Sager for being one of the few writers left willing to do it.”—Buzz Bissinger, author of Friday Night Lights